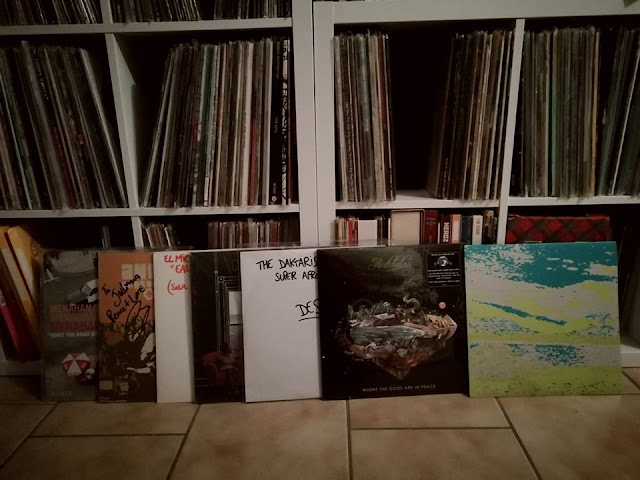 Back in 1998 (21 fuckin years ago ! Poor ol' me), I was working in Paris for some small record label and the best part of it was dealing/eating/working/talking essentially about the music scene, all day long, 24/7 with young and stupid enthusiastics people as much as I was then. One day, one of the main guy running the Desco label went through some other label office, where my good and close friend J. used to work at the time. He gave us away fresh copies of "Soul Explosion" from The Daktaris ; and it was an instant fave, and restored my curiousity about afrobeat, on its own.
Months later I managed to get my hands on the Fela boxsets Barclay did at the time -I only had maybe 2 Fela records at the time-, and it was pretty clear -lord forgive me- that those peeps from NYC were dope as shit, and that their "now" was maybe more interesting (for me, of course) than some certain "past" - with all respect and praise due for the inventors and pionneers and og's of the thing, of course. But there was something different than the "usual" afrobeat thing, was it the production, the writing, I still don't know.
⏳
Years later, I slowly got myself more and more into all this NYC scene everybody knows nowadays. The Daptone/Budos/Antibalas/Sharon Jones/Truth & Soul/Menahan messy scene (from the outside) was producing tons of exciting shit, and some of it made clear that those guys got things to tell and to inject under this afrobeat/afrofunk tag (which is still, for me, a bit reductive, to say the least).
⏳
Tonight, with a bunch of beatheads (thanks Zo, Vincent, Jean, Rob etc), we made a little car ride to check Antibalas live on stage, at Le Moloco in Belfort thanks to David Demange, and as usual, it was a blast (Matmat is probably head nodding right now too, among +300 others people). 🔥
Martín Perna, Marcus Farrar, Timothy James and the others : thank you, once again. I didn't realised it before, but it's probably the 4th or 5th time I see you guys on stage those 2 last decades and even if I had an hell of a kind of real unforgettable epiphany a couple years ago when you guys played "Beaten Meal" live on stage (that my brain still cannot really proceed today, on the most positive way of course ; thanks Stuart D. Bogie), each one of your gig got his own batch of dope surprises, and it's just perfect to hear/see/feel/live. Improving compositions, trying things in the exciting field of "how can we get out this fragile equilibrium which is supposed to be the afrobeat socle, without fucking too much with it", great line-up and huge collective musical IQ and well, it's always an accomplished mission you got there.
Thanks for coming, and for playing. Unconditionnal love indeed. 🌻
More thanks also to Tim for the great "Wind" record, wow, this was so great from you man. Just checked a couple of tunes yet but it reminds me of awesome stuff a la Jeff Parker and so on, which is GREAT to my ears. Thank you so much man.

Antibalas is touring now as a celebration for their 20th birthday. Feels like another time loop there. And not only by connecting the dots through physical records : live gigs, those moments of communions between strangers, that works so much.

ps : thursday Antibalas is live at Moods in Zurich, and Martin will do some dj set or something if I'm correct and whatever you do, Zurich friends (Ed, Cam L. Gibson, this is for you), you don't wanna miss that. 🔥