First, thanks to Dolph for his huge tiny letter. this guy have more ideas in one minute than me in a year, and when it comes to make them "alive", there's no match. 8) thanks Laulau !

i'm feeling bad, in some kind of asshole mood these days.
yesterday, helping my friend Ralf moving from Besancon to some nice little town left in our countryside, in his own biiiiiiiig quiet and beautiful house, doesn't help : i'm quite fed up with living neither in some "cool" towns, neither in real country areas, and, more than everything else, staying in a place i'm fed up with ; i think that i cannot blame anybody but me, so maybe we'll talk about something else. 8)

it's sunny outside, so i won't stay that much connected. just a few minutes to post my last reads : all of them are highly recommanded by the AJTABO (Association For June's Tastes As The Best Ones). 8?

courtesy of Alcor giiiiiaaaaant photobase and Fred's webspace (thanks to you, guys), some shots from last weekend, with Ibn Al Rabin, Guillaume Long, and Drine...
(and while we're on it, some other huge thanks to my man Fred for having this FTP shit done and complete ; our little project will come to its real interesting part since we got some space for our people...) 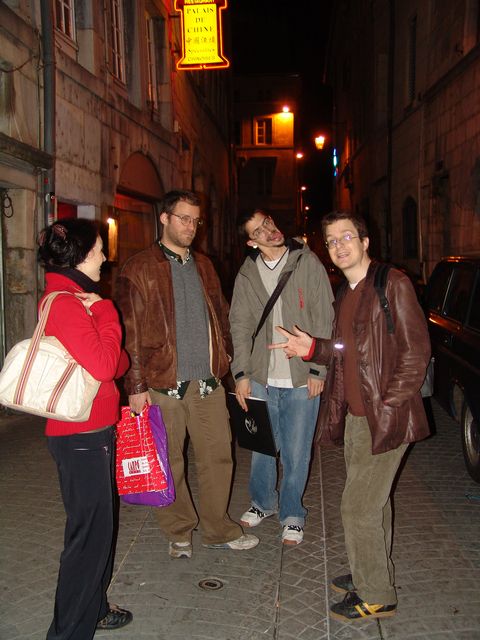 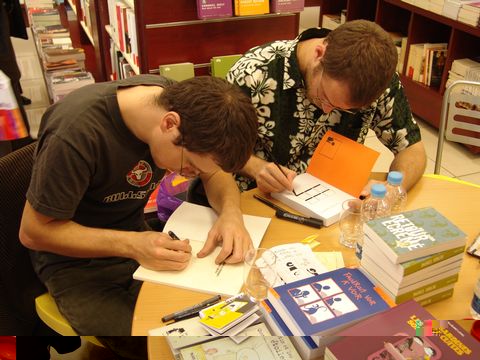 i already wrote a few lines about this year best US comic. yeah, we're only in April but i can't imagine anybody doing something good enough to rivalize with Seagle and Kristiansen's "It's A Bird", a magnificent piece of work, full of autobiography and huge paintings courtesy of this wonderful duo.

"Part savage deconstruction, part tribute to the enduring qualities of the Superman character, part tender and awkward human drama, "It?s a Bird" has as many scintillating facets as raw jewel Kryptonite. With luminous and expressive artwork by Teddy Kristiansen, it defies genre categories and poses questions about the relationship between man and superman which are hard to answer but important to consider here at the dawn of the 21st century. It?s also about as mordantly accurate a description of what it feels like to write superhero comics for a living as anything I?ve ever read. Quite simply, this is Superman for grown-ups? said other-guy-who-knows-about-comics, Grant Morrison.

find some interview from both authors right here, and a sneak PDF peek here.
and go buy it. really.

but there others books that really deserves your attention, too :

At last !!! "Le Syst?me" from Peter Kuper, in its first french form (L'An 2 publisher, thhhaaaaanks ot them...). a classic that you don't wanna miss. Kuper at his best, in some critical masterpiece that, many years after, stay one of my favorite comic book ever.

"passer l'hiver", from Vincent Rioult and Marc Lizano (la boite a bulles publisher).
post-apocalyptic tale full of easy quite-metaphysics feats, all from nice little animals' mouths, thanks to Lizano, some really great artist who turns to be a really good dialog writer, and beautifully rendered in b&w by wood engraver Rioult, some guy we will heard about more and more, hopefully.

"Julie Doucet : Journal" (l'association publisher).
i still have doubts about the contents, the container itself is why-I-love-Julie-reason : magnificent and wildstyle drawings, stickings, assembly that reall how far this artist can go. now, i'm quite less enthusiastic about what she tells in her journal. it's more about our daily facts (what she did yesterday, which emails whe receive, what she eat...) than some deep and/or personnal shit (i loved when she tells about her mood ; i wish there was more "personnal" shit like this). for Doucet addicts, no way of missing this piece.

"Les larmes de la bete" from Yoshihiro Tatsumi (Vertige Graphic publisher).
nothing to say. Tatsumi tells stories that disturb, stories that concerns some part of you, for sure. and he tells it with his own and terrific way of doing it. another japonese masterpiece.
speaking of japonese gods, the excellent "9eme art" (the magazine published by the CNBDI, official french authority about comics world) got another new ish, which is incredibily cool, with tons of great features : OuBaPo, Y. Tsuge, etc. great magazine.


and thanks to IokanaaN, some drawing notes from Joann Sfar about Claude Chabrol next movie's making, "la demoiselle d'honneur".