- Introducing... James Kochalka's Super Fuckers !
"No, it's NOT a sex book! The Super F*ckers are the baddest teenage superhero team around, and everybody wants to join them.
They live in a big clubhouse, play video games on their state-of-the-art supercomputer, smoke their teammate Grotus' slime drippings, and fight amongst themselves like cats and dogs.
Would-be heroes are lining up outside the door for a chance to try-out for a spot on the elite team. But why must they incessantly keep ringing the doorbell? The try-outs aren't until tomorrow. Somebody's got to stop them. This book is outrageously funny, vibrantly colored, and out of control. Just like America".


- My good friend Mitchum recently came back from Tokyo. He bring back wild shit with him, including some Jim Woodring' Pupshaw toy model, and some pictures, too. 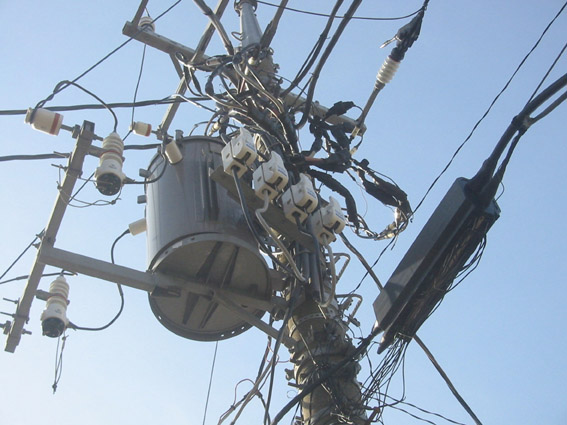 - Krsn got a website for a decent time but I just realized that it's not in this blog links. It's a shame ! Contact the blogmaster and tell him to go fuck himself.
krsn is doing mad shit, check it out.


- There's plenty of animals runnin in the subway. Did you knew it ?
"The Animals, made up using tube lines, stations and junctions were spotted by Paul Middlewick some 15 years ago.
The original Animal, the Elephant was discovered while Paul was staring at the tube map during his daily journey to work.
Since then, the Elephant has been joined by many other Animal friends. You can meet some of them on this site by clicking the 'animals' link. More Animals are being 'discovered' all the time If you want to know more about them and what they get up to, why not join our mailing list?"


- And some Comic Book Legal Defense Fund News... The cause worth it (as usual). If the work of the likes of Denis Kitchen and others was huge for years, at least Chris Starros, the boss of Top Shelf and head of the CBLDF for a while, does a big job by spreading the word on a worlwide level.
1/ "The Comic Book Legal Defense Fund has undertaken the defense of retailer Gordon Lee of Legends in Rome, GA against charges arising from the dissemination of “Alternative Comics #2.” Lee was arrested on charges of distributing material depicting nudity, and distributing obscene material to a minor; the first charge alone, a felony offense in Georgia, carries a penalty of one to three years in prison and/or fines of up to $10,000, if convicted.
The Fund has retained the firm of Begner & Begner of Atlanta, GA to lead the case, with experienced obscenity defense attorney Alan Begner heading up the defense. The Fund has also retained Paul Cadle, a independent practice attorney specializing in criminal law, as associate counsel in Rome."
2/ "The Comic Book Legal Defense Fund has secured an important victory against U.S. Customs concerning the seizure of parody comics in South Carolina.
Last November, the CBLDF filed a request for court action with U.S. Customs in Charleston concerning the seizure of issues of Stripburger that included the parody comics "Richie Bush" by Peter Kuper, and "Moj Stub" by Bojan Redzic. Customs seized the books, which were en route to Top Shelf Productions, claiming they were "piratical" infringements on existing copyrights. The Fund disagreed, finding the work to be protected speech, and retained Charleston Attorney Gregg Meyers to bring the request for court action.
This week Customs released the books and will be refunding the $250 filing fee that Top Shelf placed to challenge the seizure.


- Oh yeah, and some chewing gum for your eyes, before leaving : for the lucky north american people not livin in usa, some great visual event, in Toronto for 2 months.
Ho Che Anderson, Joe Sacco, Chester Brown, Julie Doucet, Adrian Tomine, Michael Rabagliati, William Blake, Giotto, Jacques Callot are all sharing gallery space in an exhibit entitled "Drawn-out stories - the art of graphic novels :an exhibition of original artwork and books".
"The exhibit is being held January 22 - March 20, 2005, at the TD Gallery, located in the Toronto Reference Library at the Toronto Public Library. “Drawn Out Stories” will feature original cartoon artwork, as well as illuminated manuscripts, fresco cycles and print series, in order to examine the history of the graphic novel, which proves that Canadians not only have great taste in comics, they also really know how to rock a public library" says those foolish guys from Fantagraphics.
The exhibit is located at 789 Yonge St., Toronto, ON M4W 2G8. For information, call (416) 393-7131. The gallery hours are Mon-Thurs 10-8, Fri-Sat 10-5, Sun 1:30-5. Don't even think about missing it if you're less than 50000000000 miles away from it.

While talkin' about cool exhibs, check also this Dave Cooper guy, the very same freak who already got some strong mediatized (well, in France) exhib for the last Angouleme comics festival :

And because it's aaaaaalwaaaaayyyyyyyyys liiiiiiiike thiiiiiiiiiiiiiiis, while this famous french comics festival, Lambiek, the world famous comic-shop/gallery re-opened its door on Friday, January 28th, still somewhere in Amsterdam/Netherland. Argh.


- 10 days ago, TTC and dj Orgasmic were in Mulhouse. Cool gig, and cool audience ; these guys rules on stage, their live act was really, really cool. Classic shit from their first LP and from the last one, and some surprises, too. The warm-up was awful, of course... Thanks to my Monkey man for the last hour tracks, who were huge in the coooooooooool soundsystem. Monkey and I are trying to do some music together, and well... We think about buying Universal with the money they offered to sign us. But if i could turn out to be the first bizness bitch around, Monkey is one of this indy-to-die guys, so...
Thanks to Ease for the only good feedback I got from this hours alone under burning spotlights, and for the picture, too. 8) 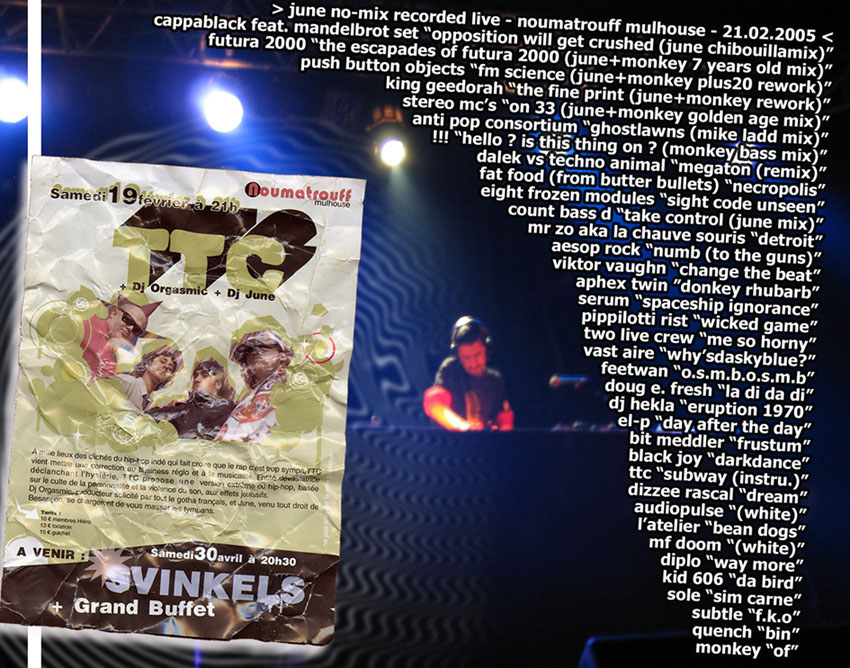